Darwin and Religion: Rumors of Warfare in a Post-Darwinian Age 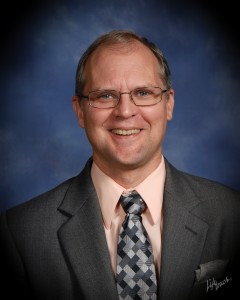 What does Darwin mean for religion? Are Christianity and evolution inevitable foes? Is the famous “warfare” thesis of Andrew Dickson White the best description of what has taken place and what must happen in the future? This lecture looks closely at what White actually said and relates this to historical and contemporary examples of what evolution has actually been said to mean for Christian beliefs. Four main patterns emerge: conflict resulting in the rejection of evolution as valid science, conflict resulting in the outright rejection of most types of theism as contradictory to science, conflict resulting in the rejection of divine transcendence and the wholesale reformulation of traditional theological beliefs, and complementarity in which traditional theological beliefs are affirmed alongside scientific conclusions, in what looks more like genuine dialogue than any of the other patterns. 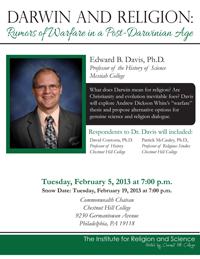 Edward B. (“Ted”) Davis is Professor of the History of Science at Messiah College in Grantham, Pennsylvania, where he teaches courses on historical and contemporary aspects of Christianity and science and directs the Central Pennsylvania Forum for Religion and Science. Davis received his B.S. in Physics from Drexel University and the Ph.D. in History and Philosophy of Science from Indiana University.

He edited (with Michael Hunter) The Works of Robert Boyle, 14 vols. (Pickering & Chatto, 1999-2000), and a separate edition of Boyle’s influential treatise on God and the mechanical philosophy, A Free Enquiry into the Vulgarly Received Notion of Nature(Cambridge University Press, 1996).

Author of numerous articles for historical and theological journals, he also writes for popular magazines. His essay on modern Jonah stories has been featured in two radio programs by the British Broadcasting Company. His current research, supported by the John Templeton Foundation and the National Science Foundation, examines the religious lives and beliefs of prominent American scientists from the 1920s.