Is the History of Religions on the Brink of a New Axial Age? 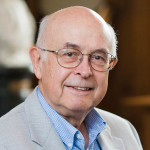 Given the present state of the world in which various forms of violence threaten the well-being of people and planet, given the role that the religions of the world are playing in that violence, many religious believers and leaders feel called to fashion a new axial age in the religious history of humankind. Similar to the first axial age (800 to 200 BCE), this will call for a radical transformation in religious awareness – this time, a shift from interreligious competition and dominance to interreligious cooperation and dialogue. Our conversation will explore the necessity, the complexity, and the possibility of such an axial transformation.

Paul Knitter is the Emeritus Paul Tillich Professor of Theology, World Religions, and Culture at Union Theological Seminary, New York. He is also Emeritus Professor of Theology at Xavier University in Cincinnati, OH. He received a Licentiate in theology from the Pontifical Gregorian University in Rome (1966) and a doctorate from the University of Marburg, Germany (1972). Most of his research and publications have dealt with religious pluralism and interreligious dialogue.  Since his ground-breaking 1985 book, No Other Name? he has been exploring how the religious communities of the world can cooperate in promoting human and ecological well-being. This is the topic of: One Earth Many Religions: Multifaith Dialogue and Global Responsibility(1995). In 2002, he published a critical survey of Christian approaches to other religions:Introducing Theologies of Religions (2002).Without Buddha I Could Not Be a Christian,was published in Oct. 2009.

From 1986-2004, Knitter served on the Board of Directors for CRISPAZ (Christians for Peace in El Salvador). He also serves on the Board of Trustees for the International, Interreligious Peace Council, formed after the 1993 World Parliament of Religions, to promote interreligious peace-making projects.