Science and Religion in China 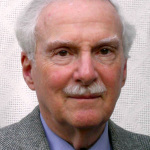 For four hundred years philosophers and authors of best sellers have been arguing—and, less often, theologians and scientists—about whether science and religion are bound to be opposed. Why can’t they agree? Who (if anyone) is right? Is this a disagreement about an issue important to everyone alive, or is it a local quarrel that occurred in peculiar circumstances at a particular time within one culture, that of Europe and America? In order to cast light on these questions, this talk will look at Western thought in other times, and thought in China to suggest a less narrow view of them. 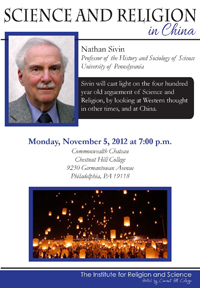 Nathan Sivin, Ph.D. of the Department of the History and Sociology of Science was born in West Virginia in 1931. He studied chemistry and the history of science at MIT and received his doctorate from Harvard. As Professor at MIT (1965-1977), he founded what is now known as the Science, Technology and Society Program. He entered the university world in 1977. At the University of Pennsylvania he has taught in eight departments and programs. He explores the history of science and medicine in ancient and modern China, but is equally interested in early Europe. His most recent book is Granting the Season, a study of the high point of traditional mathematical astronomy in the 13th century. He is an Honorary Professor in the Chinese Academy of Sciences, Beijing.