The Rediscovery of Place in Technology and Prayer 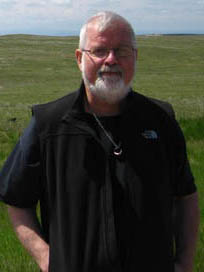 For centuries, a city’s location depended critically on the availability of resources such as clean water and fertile topsoil. Then, in the mid to late 19th century, complex systems such as railroad/telegraph networks, electric light and power utilities, urban and regional water systems were embraced with an almost religious awe. However, once key raw material advantages began shifting from being very cheap to being very expensive, this systems-based technological style became unsustainable. Today we tend rather to focus on location and on context-based technology.

This phenomenon shares a striking parallel with the present rediscovery of place and body in Western mystical prayer. At the heart of the prayer taught by Ignatius, this idea was lost for more than two centuries. Today, scholars and spiritual directors have begun to retrieve The Exercises as mystical, and prayer is understood to be sensual, bodily, and richly embedded in one’s historical context.

For more information about lecture please click the poster below. 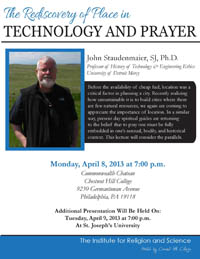 John Staudenmaier, SJ, PH.D., is a Professor of History of Technology and Engineering Ethics and Assistant to the President for Mission & Identity, University of Detroit Mercy has served as editor-in-chief ofTechnology and Culture, The International Quarterly of the Society for the History of Technology (T&C), as visiting professor at MIT’s Science, Technology and Society Program; as research fellow at MIT’s Dibner Institute, as Gasson Professor at Boston College, and as visiting scholar at Santa Clara University’s Center for Science Technology and Society. Staudenmaier consults with museums about exhibits, with television producers about historical programs, and with science and technology reporters about articles in process. A short sample of published works suggests the kinds of questions that attract his attention:Technology’s Storytellers: Reweaving the Human Fabric (MIT Press); “The Politics and Ethics of Engineering;” “Denying the Holy Dark: The Enlightenment and the European Mystical Tradition;” and “Rationality vs. Contingency in the History of Technology.” In 2011, The Society for the History of Technology presented him their Leonardo da Vinci Medal. The mp3 version of his plenary lecture can be found at http://www.udmercy.edu/udmcasts/by-date/2011/11-04-staudenmaier-da-vinci.htm